City of Armadale in put out a tender for the installation of single and double outreached 12.5 meter  street lighting poles and all necessary infrastructure. This was due to an existing intersection being modified to accommodate an increasing amount in traffic and vehicle collisions. The intersection was modified to install new traffic lights and new street lighting columns as to sufficiently illuminate the area.

Interlec’s estimating team of Paul Martens, Dionne Silcock and Tom Newnham got together and took on the job of putting together an offer for the City of Armadale and submitting it in August of 2012. This tender went through to a council meeting shortly after the final submission date where Interlec(WA) was the successful tenderer and were awarded the contract.

Part of the contract requirements for Interlec(WA) was to install the necessary infrastructure to get power to the new traffic lights control cubicle. This was done so by installing 60 meters of 16 square millimetre single phase neutral screened cable from existing overhead power lines in 50mm Heavy Duty Underground Conduit to an Un-Metered Supply (UMS) Pit, where Downer EDI had the cubicle installed and ready.

Existing street lighting poles had to be relocated as they would be in the middle of the road once the new intersection had been fully developed and open. This took precise planning in conjunction with the Project Manager of Future Grid as to avoid leaving any part of this intersection with dark spots as the existing light at this intersection was very limited to begin with.

This included; the installation of 260 meters of 240 square millimetre three phase aluminium Low Voltage feeder cable installed in 100mm Heady Duty Underground Conduit by way of open excavation and horizontal directional drilling under the existing sections of Armadale road to existing overhead power lines. This was done so that a section of the power lines could be removed as it was old and crossed over the soon to be opened intersection.

Where a cable and conduit had to cross a road Interlec’s Horizontal Directional Drilling Division were called in to install conduits under roadways. This included 10 drill shots consisting of 9 at 50 millimetre conduits for 16 square millimetre cables and 1 at 110 millimetre for the 240 square millimetre Low Voltage feeder cable.

Interlec were working in conjunction with the City of Armadale, Downer EDI and Future Grid, who are an alliance of Western Power. Overall the project was a success with Interlec completing the project on-time with zero incidents or injuries. The client was once again with a smile on their face with a positive outcome. The section of road no longer had “Dark Spots” and was able to open without any delay. 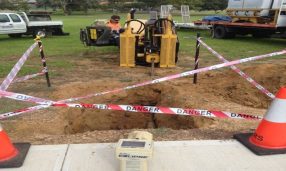