City of Armadale put out a tender for the installation of double outreached 12.5 meter  street lighting poles and all necessary infrastructure. This was due to a new dual carriageway being developed by the City of Armadale to accommodate the increase in traffic volume along this stretch of road.

Because of the size of the project, it was broken down into 2 separate stages and put out as 2 separate tenders.

The first stage involved works from Exchange Avenue to Wright Road, and had to incorporate the proposed 132 KV Transmission Line to be built at a later date by Western Power.

Interlec’s estimating team of Paul Martens, Dionne Silcock and Tom Newnham got together and took on the job of putting together an offer for the City of Armadale and submitting it in March of 2012. This tender went through to a council meeting shortly after the final submission date where Interlec(WA) was the successful tenderer and because of a successful history and the ability to take on large scale projects, were awarded both stages of this Project.

The project consists of standing 43 steel standard double outreached poles. This was done using Interlec’s truck mounted crane by an employee of Interlec who has had over 20 years experience and is more than competent to carry out the task.

Part of the contract requirements for Interlec(WA) was to install the necessary infrastructure to allow for these lights to be energised. 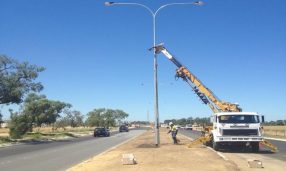