City of Armadale in put out a tender for the installation of single and double outreached 12.5 meter  street lighting poles and all necessary infrastructure. This was due to a new dual carriageway being developed by the City of Armadale to duplicate the existing Warton Road from Jandakot Road to Nicholson Road due to a heavy volume of traffic in the area due to new sub-divisions being developed.

Interlec’s estimating team of Paul Martens, Dionne Silcock and Tom Newnham got together and took on the job of putting together an offer for the City of Armadale and submitting it in March of 2012. This tender went through to a council meeting shortly after the final submission date where Interlec(WA) was the successful tenderer and were awarded the contract.

Part of the contract requirements for Interlec(WA) was to install the necessary infrastructure to put the existing overhead power lines underground as they ran down the middle in the new median strip.

Interlec were working in conjunction with the City of Armadale’s representative Underground Power Development and Future Grid, who are an alliance of Western Power. Overall the project was a success with Interlec completing the project with zero incidents or injuries. The client was once again happy with the outcome and the section of road no longer had “Dark Spots”. 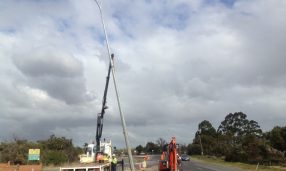